This blog was moved in early 2013 to my website www.featherfolio.com. 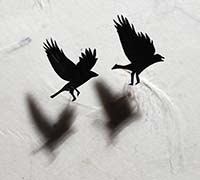 Posted by Chris Maynard, Artist at 7:48 AM No comments:

On Sunday I participated in the Audubon Society’s annualWinter Bird Count.  Each participating city has a five- mile radius circle where people divide up and count as many kinds of birds as they can. Being almost the darkest day of the year, at least in the northern hemisphere, it was cold, windy, and rainy.  I thought the birds would, like me, want to get to a warm cozy place. But then I looked closely and saw that their feathers were sheltering them. The curved body feathers were fluffed up. They were shedding the rain, and keeping the wind out. So elegant and cozy. When I went home, I took off my cumbersome and relatively ineffective clothes--my outdoor feathers. I sat under the roof inside my house by a warm fire--my indoor feathers.
Posted by Chris Maynard, Artist at 9:26 AM No comments: 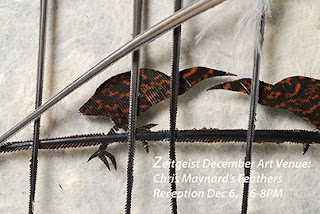 For December, my work will be at Zeitgeist and Row House in Seattle.

Row House is a cafe/restaurant on Republican by the Amazon Headquarters offices. It is a nice and funky atmosphere and despite the low lighting in places, my work displays nicely there.  We hung 25 pieces December first.  They will be on display until at least the middle of January.  A reception is planned for early January--more about this later once the date is nailed down.

Zeitgeist is in the gallery district downtown Seattle in Pioneer Square on Jackson Street.  The artist reception at 6: pm on December 6th coincides with the first Thursday Seattle Arts Walk.  Work will be hung December 5th, up to 20 pieces.  This show will go until January 2nd.

Posted by Chris Maynard, Artist at 4:19 PM No comments: 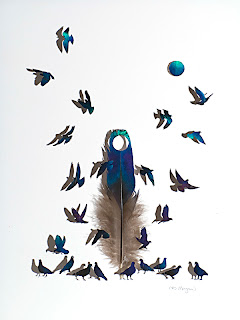 What was any art but an effort to make a sheath, a mould in which to imprison for a moment the shining, elusive element which is life itself -- life hurrying past us and running away, too strong to stop, too sweet to lose? --Willa Cather from Song of the Lark (1915).

This was read to us this September by Robert Bateman after the Birds in Art museum show in Wisconsin.

..."the shining, elusive element which is life itself..."  Cather says it best.  It is often what I want to capture in my work.

Posted by Chris Maynard, Artist at 1:46 PM No comments: 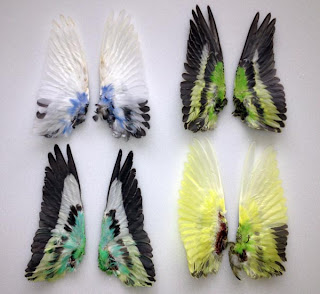 I prefer to use molted feathers that a bird sheds.  It’s kind of like recycling.  Nevertheless, sometimes people give me their pet bird that died.  Often, an owner who treasured their bird wants to see the feathers put to use when the bird dies – as sort of an  honor the bird. So I have learned to pluck and do a bit of taxidermy-type work.  It was distasteful at first, but now I see it as just part of life.  So here are the wings of four parakeets.  They curve in a beautiful angelic way, smaller than the palm of my hand.
Posted by Chris Maynard, Artist at 12:14 PM No comments: 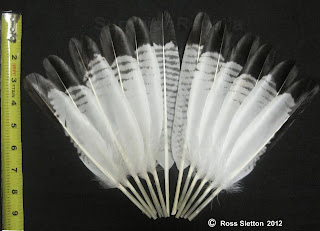 I strive in my art to honor feathers and the birds they came from.  Some talented people paint on them but it is not something I am drawn to do. That said, I came across a man’s work that impressed me.  Super Regalia.  He paints mostly to imitate feathers that are otherwise illegal to have—like hawks and eagles; or painted to look like rare and hard to find feathers like the tails of Red-tail Black Cockatoos.  These feathers caught my eye because it is hard to tell them apart from the real thing. He sells them and uses them in Native regalia—fans, bustles, and such.
Posted by Chris Maynard, Artist at 11:46 AM 1 comment: 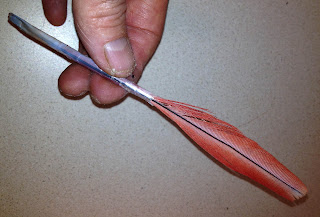 I saw a cartoon in the New Yorker with three different pictures of Jupiter with a caption under each, “Jupit”, “Jupiter”, “Jupitest”.  Which got me to thinking about a piece entitled “Feath, Feather, Feathest”.   Once in a while an aviary bird dies in mid-molt, when its feathers are still growing and the owner gives me the dead bird.  This just happened with a Scarlet Macaw.  Its full grown feather would have been 20 inches or so long.  But this partly grown feath is just 7 inches.  When I take a full grown tail and cut some flying macaws out, it will become feathest.

Posted by Chris Maynard, Artist at 2:19 PM No comments: 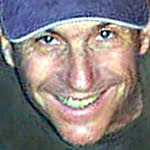